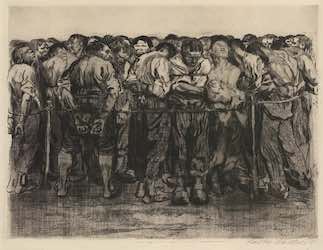 From 1903 to 1908, Käthe Kollwitz worked on the metal plates for Baurenkrieg / Peasant War, a series of etchings that represent the brutal treatment of peasants in sixteenth-century Germany, their rise to revolution and battle, and their subsequent humiliation and death. Although based on historical events, the series anticipates tragedies that unfolded across Europe during the first half of the twentieth century. A special addition to this exhibition, found only at the Sordoni Art Gallery, is a display of Philadelphia Poet J.C. Todd's soon-to-be published poetry inspired by Kollwitz's artwork. 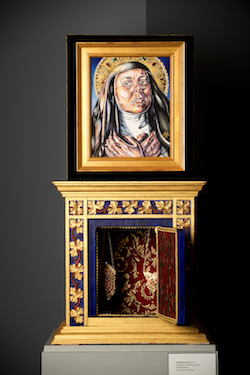 Sacred Sisters is a collaboration between visual artist Holly Trostle Brigham and award-winning poet Marilyn Nelson. Brigham is a figurative painter whose work explores feminist narratives through paintings that are enriched by her research into the art, symbolism, and history of her subjects. Brigham's paintings depict eight nuns who represent many centuries, religions and cultures. Each nun was an artist or writer. While Brigham imagines the nuns in the midst of their creative work, Nelson gives voice to each nun with a poem phrased as a prayer.

Holly Trostle Brigham of Philadelphia, Pennsylvania, is a figurative painter who creates mythical allegories of contemporary and historical subjects. Her paintings have won awards at the Pennsylvania Acadmy of Fine Arts, the Lancaster Art Association, and for watercolor at the Harrisburg Art Association. Brigham's work has been exhibited in New York, Washington, D.C. Massachusetts and Pennsylvania. She taught painting and drawing at the Baum School of Art and has taught at the WorcesterArt Museum, Worcester State College, Lebanon Valley College, Lafayette College and Pasadena City College.