Opening Reception: Thursday, January 28, 5-7pm • Free and open to to the public.

mmortalized by writers, filmmakers, and musicians from Stephen King to Dr. Hook & the Medicine Show, the cover of Rolling Stone magazine has embodied generations of popular culture. For artists, the cover is a coveted career achievement, and for many readers, it represents a fantasy realm of the rock-n-roll lifestyle. The exhibition Backstage Pass: Baron Wolman and the Early Years of Rolling Stone explores how the lens of one artist’s camera captured and helped define one of the most important eras in rock-n-roll history.

In the 1960s and 70s, Rolling Stone provided a national voice to the counter-culture movement, and gave readers unprecedented access to musicians before the days of personal branding. As Chief Photographer for Rolling Stone from 1967 to 1970, Baron Wolman pioneered a new genre of iconic rock photography. Backstage Pass gives viewers an opportunity to experience how the photographers and editors of Rolling Stone guided the creation of the “rock star” persona, from concert, to cover, to icon. 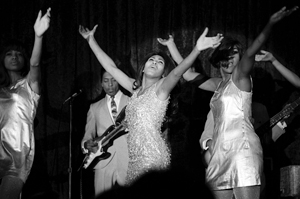 Through the exhibition’s 35 framed photographs, contact sheets, and original Rolling Stone magazine covers, Backstage Pass presents an intimate view of a crucial period of cultural transformation in American history. Visitors will go “backstage” to see how photographic coverage of events such as Woodstock and The Day on the Green have contributed to our collective cultural memory.

Feeding the heightened political and cultural climate of the time, featured artists Jimi Hendrix, Mick Jagger, Janis Joplin, Tina Turner, and Frank Zappa came to represent generational ideals through music, words, and visual imagery. Taking an unobtrusive approach with his subjects, Wolman’s techniques resulted in photographs and eventually magazine covers that capture a rawness and emotion of the artists and a generation. Together, Backstage Pass encourages our understanding of how images become iconic symbols of American history.

A Program of ExhibitsUSA, a national division of Mid-America Arts Alliance and The National Endowment for the Arts.