The celebration of commencement is surrounded by rich traditions. The established community of scholars convenes to recognize officially the newest group of proven scholars and welcome them in fellowship. Graduates don the attire that for years has symbolized scholarship attainment.

During the Middle Ages those seeking an education traveled to European centers of learning. Centers of learning and universities were closely allied with the clerics of the time, and the scholars donned garb similar to that worn by the clergy. This evolved into the academic uniform, a long black gown, hood, and cap, which proved useful for studying in unheated and drafty buildings. The hood served simultaneously as a head covering, a repository for coins and alms and the forerunner of the modern day book bag. The hood was adorned with the colors of the university and designated the young scholar's school or university affiliation. By their distinctive clothing the students were set apart and distinguished from the citizens of the town; hence the origin of the phrase "town and gown."

American colleges and universities adopted the wearing of the traditional apparel in Colonial times, and a common code for academic apparel was established in the mid-nineteenth century. 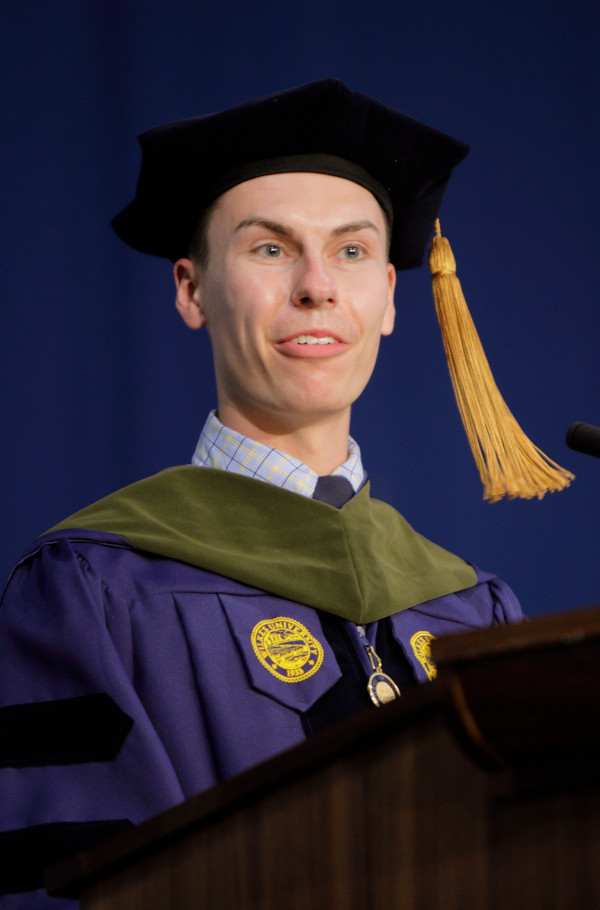 To have earned the privilege of wearing academic costume regalia signify not only the completion of a program of studies, but entrance into the camaraderie of scholarship.

The hood is the most distinctive feature of academic regalia. The inside of the hood is lined with the official colors of the institution; Wilkes graduates wear hoods lined with the blue and gold colors of the University. The velvet trim around the outside of the hood designates the degree of field of study of the graduates. The velvet colors worn by today's graduates signify the following:

The style of the gown distinguishes graduates by the degree they have earned. Those earning the bachelor's degree wear a simple black gown with elongated pointed sleeves. Holders of the masters degree wear gowns with a longer, closed, square cut sleeve. The doctoral gown is trimmed with velvet stripes on the sleeves and panels of velvet on the front closure of the gown. 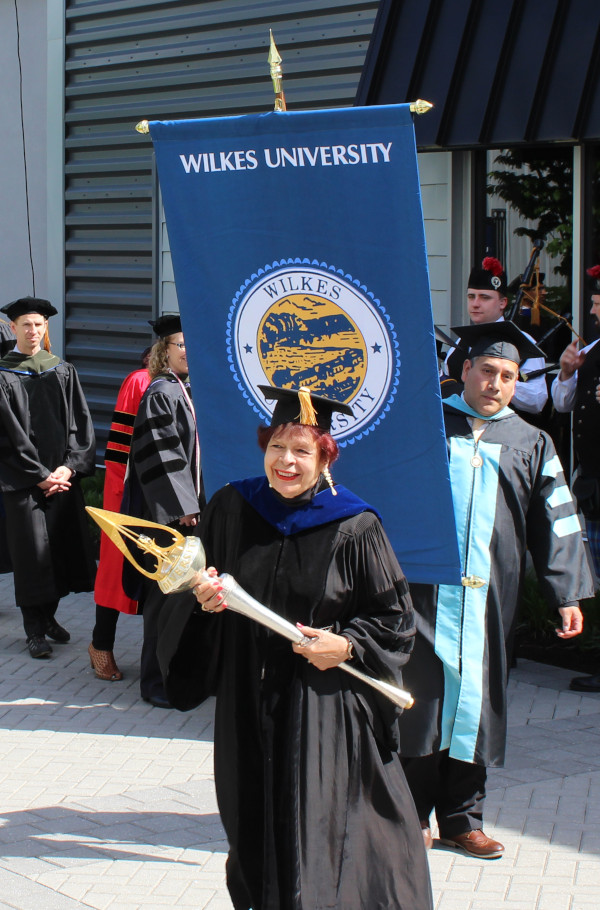 The Wilkes University mace and presidential chain of office were gifts of local donors and were first used in 1970 at the inauguration of the second president of Wilkes. They were designed by Ottie Hill Chwalek '61 and executed by Kurt Matzdorf, a nationally recognized gold and silversmith from the State University of New York at New Paltz.

The sterling silver mace has a gilt knob at it base and a gilt circle at the top bearing the inscription "Wilkes College 1933." The bowl, rising above the neck of the mace, signifies Wilkes-Barre's role as a melting pot, forming a new and vigorous community of people from many different backgrounds. This theme is reiterated in the inscription of the University's motto "Unity Amidst Diversity," which surrounds the upper part of the bowl. The gilt flame symbolizes the enlightenment gained from higher education, while the piece of anthracite coal set in the center of the flame commemorates the origin of the University in a community known for its coal mining past.

The Presidential Chain of Office, created from sterling silver, has alternating bowls and gilt flames, repeating the motif of the mace. On the front of the four-foot chain hangs a gilt seal of Wilkes that is suspended from a cluster of oak leaves with acorns, suggesting the strength and sturdiness of future generations. On the back of the Presidential Chain of Office is a silver portrait of Dr. Eugene S. Farley, the first President of Wilkes. Gilt oak leaves commemorating his strong leadership of the emerging institution surround Dr. Farley's portrait.