The years of consolidation and uncertainty, which began with Hurricane Agnes, continued into the sixth decade now concluding.

While the inflation which peaked around 1980 slowly diminished, problems with a diminishing applicant pool and competition from government-supported institutions brought new challenges to Wilkes. Indeed, the end of inflation was a mixed blessing.

Energy costs continued to rise more than the cost of living, as did the costs of staying abreast of technological change and the efforts to raise the level of salaries which had been eroded during the inflationary years. At the same time, government support, which had been taken for granted in the 1960s and had significantly diminished in the 1970s, declined further in the new decade. While there was some growth in enrollment in the late 1980s, the 1990s began with an enrollment decline.

With financial limitations and fluctuating student numbers the consolidation phase of campus development which had begun after Hurricane Agnes continued. Now, however, campus changes focused on new issues. During the years of rapid growth, the College had been preoccupied with the provision of adequate facilities. Now that the growth period had ended, Wilkes had to concern itself more with the quality of campus life. 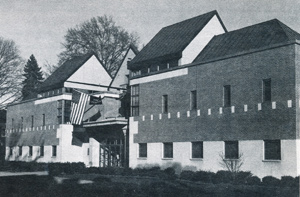 In the early years, faculty and students had taken a sort of perverse pride in the rough edges of the campus. In a buyer's market where every factor had to be considered in trying to gain an advantage over the competition, the pioneer atmosphere could not longer be considered an advantage.

This was true about the basic amenities of student life. During the decade only one new building was erected. The Wilkes gymnasium had been an economical solution to a major problem when it was opened in 1950. By the 1980s, it had long since become inadequate. It was demolished and a new multi-purpose building, the Marts Center, was erected on the site. Incorporating meeting facilities, a large student recreation center, and a gymnasium roughly twice the size of its predecessor, it opened in February 1989.

While technically not a new building, an athletic field house was built at Ralston Field in Edwardsville. 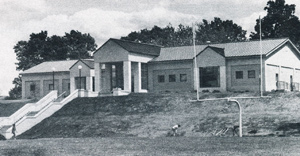 The old mine buildings which had formerly been used for locker rooms and athletic facilities were perhaps the roughest edge on the campus. Since the buildings themselves were virtually indestructible and excessively unattractive, they vanished into the infrastructure of a new field house which was built around them. The result was an architectural tour de force.

A maturing campus also had to consider other aspects of image and function. Function included restructuring the College into three schools, and approval of university status by the Commonwealth of Pennsylvania. Wilkes College became Wilkes University in December 1989.

While the southwest quadrant had been fertile soil in which to plant a college, the opportunistic growth pattern had left Wilkes without a clear image. While campus plans began emerging in the 1960s, Wilkes was distracted from their completion. It was not until the post-flood period that the campus began to take on more of the character of a college campus and less of a college coexisting in an aging urban residential neighborhood.

During the early part of the decade, campus changes continued along the pattern of the 1970s. Following the sale of Parrish Hall, the block between Northampton and South streets had become the undisputed center of the instructional campus. Two of the seven private homes remaining in this block were acquired and removed in 1984 and 1985. The Fenner home was donated with continuing right of occupancy by the owner. The first step towards providing a unique identity for the block came with the dedication of the Burns Bell Tower in October 1987.

There was greater activity in the peripheral campus areas. The residence hall row on South River above Northampton was completed with the acquisition of Rifkin Hall in July 1989. Wilkes property now runs continuously along the Susquehanna River from Sterling Hall on the north to Doane Hall on the south. Two additional buildings were acquired on Franklin Street below South Street. These were the Max Roth Center (1984) and the apartment building which would become Fortinsky Hall (1987). Fortinsky became the home of the School of Business, Society and Public Policy and Roth became an administrative building. Together with Schiowitz Hall, which houses the Department of Nursing, these formed an enclave in a block otherwise given over to student housing and services.

At the end of the decade the new University began a new construction program concentrating on a more functional campus rather than on unplanned growth. The decision to establish a Pharmacy program required facilities changes which have evolved into the redesign of the campus. The plan provided for a new academic building on Franklin Street between Capin and Sturdevant halls. A 900-foot greenway running through the center of the block became the symbolic center of the campus.

The changes began with renewed purchases in 1992 and 1993. The Minrose, Lichtenstein, and Bell properties on Franklin Street were purchased. Minrose has been renovated as a new student services building, including the finance and registrar's offices. The Lichtenstein and Bell buildings will be removed.

On the central campus, the home at 67 South Street was acquired in 1993 and, through the generosity of Allen P. Kirby, Jr., renovated as the Allen P. Kirby Center for Free Enterprise and Entrepreneurship. Fifty-seven years after the acquisition of Conyngham and Chase halls, only two private buildings remain in the original block.

The changes will challenge the ingenuity of the University. The River mansions above and below the main campus remain as a reminder of the anthracite era. The renovation of buildings such as the Kirby Center and Capin Hall, and the continued restoration of Kirby Hall, point to the continued effort of Wilkes to reconcile the inherent conflicts between history and function.