At the beginning of Wilkes' fourth decade, further dramatic changes were already underway.

The commitment to graduate technical education led to the construction of a new extension to Stark Hall, containing 91 rooms and about 38,000 square feet. The research center cost $1,000,000, raised through gifts and a $400,000 grant from the Area Redevelopment Authority. The building was opened in January 1964.

On August 11, 1964, ground was broken for a Center for the Performing Arts. This was located on the lands originally owned by the Conyngham brothers and enjoyed a commanding view of the Susquehanna River. Long vacant, the lands were owned by the Wyoming Valley Society of Arts and Sciences and had been destined for the development of cultural facilities. Since only Wilkes had any prospect of raising sufficient money to build such a facility, the land had been given to the college. Finally, in October 1965, Wilkes acquired a performance center of its own.

The center, made possible by the anonymous financial support of Dorothy Dickson Darte, was important to the maintenance of the educational balance of the college. By its construction, Wilkes reaffirmed its dedication to the arts and to a broadly-based education at the same time that it increased its commitment to the sciences. The arts complex was completed by a music building which opened in mid-1969.

The beginning of Wilkes' fourth decade was also marked by expansion of the outdoor athletic facilities in Edwardsville, across the Susquehanna from the main campus. As already noted, Wilkes had leased Artillery Field from the Pennsylvania National Guard for use as a baseball field since the 1940s. In 1960 and 1963 the college purchased land between the Connecting Railroad and Kirby Park, and across Northampton Street from the baseball field, from Glen Alden Corporation.

The old colliery site, together with the former mine buildings, provided Wilkes with a field house and locker rooms, a football field and stands, a soccer field and tennis courts. The new athletic facility was opened in the fall of 1965 and was named Ralston Field, in honor of George Ralston, Dean of Students and former Wilkes football coach. Improved facilities seemed to inspire improved teams. In the late 1960s Wilkes established a record 33 consecutive football victories over four seasons, securing national recognition and the Lambert Trophy.

One of the expedients of Wilkes' growth and at the same time one of the institution's charms was the exclusive use of old homes as residence halls. Residents developed an almost clannish loyalty to the buildings in which they spent their college years. On occasion in the 1960s, students named dormitories with the tacit approval of the college administration. Such was the case with "Hainna" Hall, commemorating a pejorative colloquialism frequently heard in the Wyoming Valley in those days, and Bruch Hall, named for the faculty resident, and later redesignated as the second Ashley Hall. Artistic license was also tolerated. For a time, Bruch Hall was resplendent with a purple chimney inscribed with the building's name.

By 1964, housing demands exceeded supply and few additional mansions were available. The College leased housing for the surplus students on the third floor of the Carlyle Drama School at 224 South Franklin St. and in the Y. M. C. A. and the Sterling Hotel. It also constructed its first new dormitory. 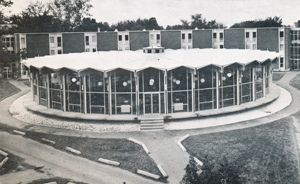 The dormitory was built on land acquired by the Urban Redevelopment Authority in the old blue-collar district along Wright Street. The street was closed and the dormitory and an attached dining hall (photo toward top of this page) were built in the center of the block. Construction began in April 1965 and the "New Men's Dorm," later named Pickering Hall, opened in September 1966.

Initial plans called for four identical dormitories, with a dining hall for each pair. Fortunately, the plan was never completed. Pickering was a Y-shaped building accommodating 268 men and was claimed to be an improvement over the barracks-type dormitories built by other colleges during the post-war expansion. The claims were optimistic. The building lacked the intimacy of the old residence houses and the system of dividing the building into nine named residential units - one for each wing on each floor - was only partially successful as a substitute. Once again, the initial occupants were given considerable latitude in naming the "houses," astronauts and Republican senators acquiring equal billing. The houses were named Butler, Colonel's, Diaz, Dirksen, Grissom, Priapus, Roosevelt, Warner, and Webster.

The added capacity provided only temporary relief. The Sterling Hotel and the Y. M. C. A. continued in use and the College resumed the policy of converting old houses, annual additions being made through 1971.

Wilkes' library had outgrown Kirby Hall and a new facility was opened in November 1968. It was named the Eugene Shedden Farley Library to commemorate the College's first president. Similarly, administrative functions had outgrown Chase Hall. This problem was resolved by the gradual conversion of the second Weckesser Hall from a women's residence hall into the main administration building, a process completed in mid-1967.

Unfortunately, Wilkes' good luck was about to run out. The earliest sign of ill-fortune was the burning of Conyngham Hall, the College's first building, during the Christmas break in 1968. An inconvenience, the fire was followed by a disaster -- the Hurricane Agnes Flood of June 1972. The decade which began on a note of promise and optimism ended on a note of uncertainty.