The Evolution of Wilkes has been influenced strongly by external events.

The depression of the 1930s was a major factor in its creation. World War II and the revolution in American higher education after the war contributed to its expansion to a four-year institution. The revolution was stimulated by the G. I. Bill, the first significant federal subsidy for college education. The subsidy expanded the student reservoir and led to rapid growth of old colleges and a proliferation of new ones. Although Wilkes-Barre had no colleges in 1933, it had acquired two four-year institutions by 1953.

The expansion of Wilkes faltered as the G. I. Bill ran its course. However, during its third and fourth decades, the College would resume its growth, with the federal government again acting as a major source of support. Two important factors influenced the third decade. The conclusion of the Korean War brought more veterans supported by the G. I. Bill.

Following the launching of Sputnik in 1957, the government broadened its interests from veteran students to support of all higher education, particularly in science and engineering. The third decade was, therefore, a time in which the relations between Washington and the colleges was being redefined. With the addition of maturing baby boomers to the applicant pool in the 1960s, Wilkes' fourth decade coincided with the golden age of collegiate growth.

These influences were reflected by renewed expansion of the campus. As enrollment began to increase, dining facilities became inadequate. The resident student dining facility had been moved from the Long building (renamed Barre Hall) to Sterling Hall in 1950. The old snack bar had been retained in Chase Hall to supplement the Commons, but Chase had its own space shortage. The problem was resolved in three stages. 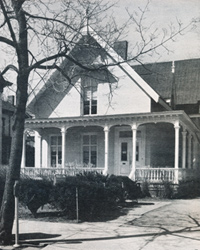 The Harding home was purchased in June 1954 and converted to a snack bar with four dining rooms on the first floor and a faculty dining room on the second. Smoking was prohibited except for a room on the second floor front. In 1955, the Commons was more than doubled in size by connecting the existing structure with the old Kirby garage by a new two-story middle section. Finally, in 1959, Gilbert McClintock's law office was willed to the College. The building to the rear of the office was converted to a snack bar to serve the north end of the campus.

The College increasingly attracted resident students. Only one new residence hall, Warner Hall, was added between 1951 and 1956. It opened for male students in 1954. However, between 1956 and 1959, seven were added. Two more were opened in 1961 and an additional three in 1962.

More students meant greater demands on instructional facilities as well. The first new academic building, Stark Hall, opened in September 1957. It was built on the site of the ex-garage classrooms roughly in the center of the block. The main lecture hall was retained and incorporated into the new structure.

In its search for suitable facilities, Wilkes established a new instructional center at the far north end of the campus. In late 1958, the college purchased the five-story office building of the Glen Alden Corporation, together with the adjacent home of Glen Alden President Francis Case. The Glen Alden building became Parrish Hall, named in honor of a prominent leader of the local coal industry, and housed the business department and the comptroller's office.

In November 1961, Wilkes gained national recognition on the NBC "Today" program as a successful new urban college. The College also had made a commitment to support technical graduate programs and facilities in order to bring R. C. A. Corporation to Wilkes-Barre. Wilkes had achieved recognition and growth, but its most explosive growth was yet to come.