The development of an urban university,

located only two blocks from the center of a medium-size city, presents unique problems not experienced by more traditional schools evolving on empty land in suburban or rural America. The key word in urban development is displacement. A center-city university must adapt its city environment to its own uses.

Initially, this usually means converting existing buildings for educational purposes. Eventually, it means replacement of former residential or commercial structures by newer buildings specifically designed for educational use. These pages are designed to show how this process influenced the development of Wilkes University from its opening in 1933 as Bucknell University Junior College to its present.

Peruse the stories and maps linked from the right columns of these pages to learn about the intriguing history of Wilkes University and the city it calls home -- Wilkes-Barre, Pennsylvania.

The area chosen for Wilkes was an accident of history. 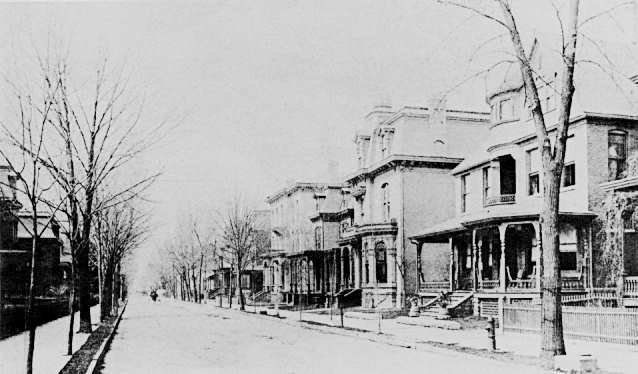 The university has established itself primarily along South River and South Franklin streets, the two major thoroughfares in the southwest quadrant of downtown Wilkes-Barre. The streets lie adjacent to the Susquehanna River, a location which normally would have developed as an industrial district. However, the evolution of Wilkes-Barre's waterfront followed a different pattern. Normally canals and railroads in interior towns followed the river as the path of least resistance and industrial growth followed the transport corridor. However, the North Branch Canal, which originally provided access from Wilkes-Barre to the outside world, turned inland south of Wilkes-Barre and ran some five blocks inland from the river as it passed the center city, returning to the river front about one and one-half blocks north of the public square. While the Lehigh and Susquehanna Railroad, the first to enter Wilkes-Barre, built its terminus on the river front, the station was soon abandoned and the city's railroad corridor paralleled, then incorporated, the canal bed.

As a result, the southwest quadrant became a region of homes rather than factories and warehouses. The area along the river bank was occupied by the residences of the rich and powerful, including coal barons, bankers, and leading lawyers. The homes of lesser lawyers, doctors, prominent businessmen and those in upper management positions were further inland. There was also a district occupied by lower economic groups.

Below South Street the river turns away from South River Street.

The wealthy followed the river, building their homes along a branch street known as West River. South River below this point had smaller homes occupied by common tradesmen. Wright Street, an alley between River and Franklin, had tiny houses, one eight-residence row structure, and several tenements, catering to a highly mobile blue-collar population, few of whom owned the houses in which they lived. These included tailors, coachmen, blacksmiths, miners, masons and painters, among others. Among the most intriguing households in this district was the McCabe household at 11 (later 21) Wright Street. All of the employed women of the family appear to have been telephone operators and must have represented a significant proportion of the entire operator staff of Wilkes-Barre in 1894, when phones were still in their infancy.

Similarly, the fate of the Lehigh & Susquehanna Depot shows how the Wilkes-Barre waterfront was diverted from the normal urban fate early in the city's history. Following removal of the station, William L. and Charles M. Conyngham, brothers who made their fortunes in the mining and distribution of coal, built two of the largest mansions along the riverfront on the site. Today the land occupied by the two homes holds the Dorothy Dickson Darte Center for the Performing Arts.

By 1893, the southwest quadrant had developed into

a unique urban setting. An area of predominantly large homes in a park setting along the Susquehanna River, the first portions of the area occupied by Bucknell University Junior College, provided an academic environment far more traditional than was normally true of urban universities. As Wilkes grew, the redevelopment of a decaying blue-collar area adjacent to the campus provided the opportunity for new construction to meet the college's needs.