History of the Founders Gala

Since 2014, Wilkes University has celebrated its heritage of educating first-generation college students through our annual Founders Gala. At the gala, the University awards the President's Medal to an honoree or honorees who have helped to enhance the student experience and advance the mission of the University.

Esther B. Davidowitz has been a dedicated leader and supporter of Wilkes University for nearly 50 years. She is a long-time advocate for culture and education at Wilkes, in the Wyoming Valley and throughout the world.

Mrs. Davidowitz was a member of the Wilkes Board of Trustees from 1973 through 2006 when she received emerita status. During her tenure on the board, Mrs. Davidowitz served as the treasurer and secretary, and was the chair of the academic program committee and executive board. She was a key player in the institution’s growth, most notably its evolution from Wilkes College to Wilkes University in 1990. Mrs. Davidowitz has been a close advisor and friend to the each of the University’s presidents and co-edited the writings of Wilkes’ founding president, Dr. Eugene S. Farley, in “Essays of an Educator.”

Mrs. Davidowitz was a non-governmental representative to the local chapter of the United Nations for the National Council of Jewish Women. She was also a co-chair and delegate to the “Faith in Humankind Conference” of the United Nations Holocaust Memorial Council in Washington, D.C. In 2002, she was appointed as a delegate to the Global Peace Initiative of Women in Geneva, Switzerland. As a member of the advisory board, Mrs. Davidowitz was involved in creating courses at Wilkes that trained women on running small businesses and becoming financially independent. She developed similar courses for UNIFEM of the United Nations, the Afghan Women’s Business Council and the Kabul University working with Anne Friedman Glauber.

A prominent figure in the Wyoming Valley, Essy has received numerous accolades for her professional, civic and community efforts. She was awarded the Distinguished Community Service Award by the Greater Wilkes-Barre Anti-Defamation League of B’nai B’rith and was the recipient of the Hannah G. Solomon Award from the National Council of Jewish Women. Essy and her family have also been recognized by the borough of Kingston, Temple Israel and Generation2Generation for their work in the community.

Essy is a graduate of Wyoming Seminary, Kingston, Pa., and Simmons College, Boston, Mass. She was recognized by both institutions as an outstanding graduate. A resident of Kingston, she and her late husband, William, were married for 62 years during which time he encouraged and supported their mutual endeavors. Mr. Davidowitz founded Penn Footwear in Nanticoke and was an integral partner, supporter and facilitator of the couple’s involvement in the community. They have four sons, Jeffrey, a member of the University’s board of trustees married to Sherry; Steven; Ivan, married to Cheri; Ben; and nine grandchildren.

Mrs. Davidowitz compiled, edited and contributed to a variety of books, essays and poetry collections. She was also a flutist and harpist who performed throughout the region. She helped establish the Muriel Bravman opera library collection housed in the Dorothy Dickson Darte Center for the Performing Arts. Her service, leadership and contributions have been vital and true to the values of Wilkes University, and as such, she is a deserving recipient of the 2020 President’s Medal.

Eugene Roth, Esq. ’57 is the longest-serving attorney at Rosenn Jenkins & Greenwald, LLP, rising through the ranks from law clerk to partner during his 60-year tenure. A prominent figure in northeast Pennsylvania, Gene has received numerous accolades for his professional, civic and community efforts with awards from the United Hebrew Institute, the Boy Scouts of America and the Philadelphia Chamber of Commerce. He has also been featured in a variety of Who’s Who publications. He has served on the board of directors for Commonwealth Telephone Enterprises, RCN Incorporated, Wachovia Bank and was chairman of the Geisinger Wyoming Valley Hospital Advisory Council.

Gene has the distinction of serving under each of Wilkes University’s six presidents, first as vice president of his undergraduate class, then as president of the alumni association and eventually as a member of the University’s board of trustees, a role he serves to this day. He was the chairman of the board from 1993 to 1998, helping to establish the Nesbitt School of Pharmacy.

A first-generation college student, Gene closely identifies with Wilkes University’s mission of providing educational opportunities to all who show potential. His philanthropic support is apparent across campus, especially in Lawrence W. Roth Hall, a standout residence for first-year students, and the Max Roth Center, home to the Center for Global Education and Diversity.

A native of Wilkes-Barre, Gene and his wife, Connie, are parents to Joan Kleinman, Stephen Roth and Jeffrey Roth, and have 13 grandchildren. In memory of their son, they have established the Lawrence W. Roth Memorial Scholarship, granted annually to a deserving Wilkes student with an interest in the law, politics or community service. Gene was recognized with the Lifetime Achievement Award from the Wilkes Ancestral Colonels and the Eugene S. Farley Memorial Alumni Award. He is also a long-time member of the prestigious John Wilkes Society. His vision, leadership and contributions have been vital and true to the values of Wilkes University, and as such, he is a deserving recipient of the 2019 President’s Medal. 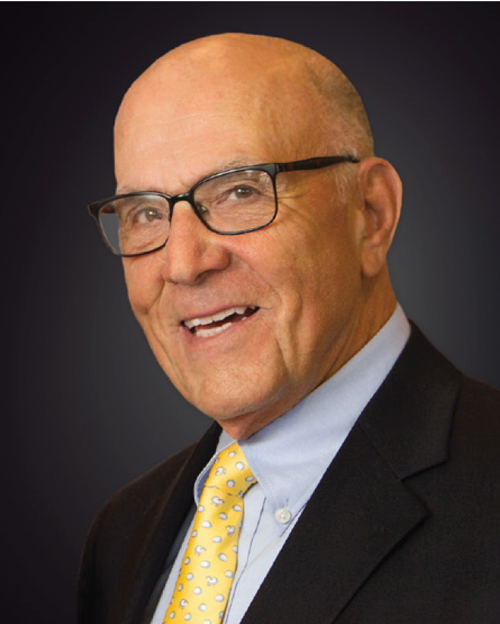 Lawrence E. (Larry) Cohen ’57 joined Benco Dental in 1959, when the organization served a handful of dentists in Wilkes-Barre and Scranton. Over the next three decades, Benco grew into one of the largest dental distributors in the United States, with sales of more than $100 million. Since the ’90s, Larry has worked closely with his sons to build Benco into the nation’s largest family-owned dental distributor, serving dentists from coast to coast. He pioneered many innovations now considered commonplace in the industry. More importantly, the organization never lost its family-owned, customer focused culture. Currently, Larry serves as Benco’s chairman and chief customer advocate with a focus on prompt customer resolution and support. Larry and his wife, Sally, are proud parents to Chuck and wife Rebecca, and Rick, as well as proud grandparents of Benjamin and Leah.

Larry is recognized as a respected philanthropist with significant donations to many organizations, including his alma mater, Wilkes University. His generosity is seen in the Cohen Science Center at Wilkes University, which brings four floors of state-of-the-art laboratories together to encourage interdisciplinary research and study. He also served on the Wilkes University Board of Trustees. His vision, candor and commitment have been vital and true to the values of Wilkes University, and as such he is well deserving of the 2018 President’s Medal.